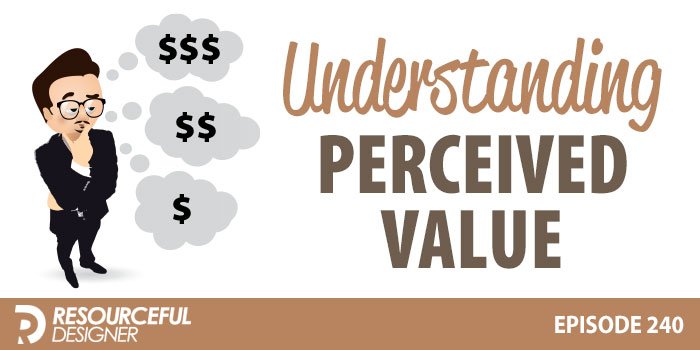 Do you understand what perceived value is?

Many graphic and web designers have difficulty understanding perceived value when it comes to how their clients view them. You can offer the same service to multiple people, and each one will perceive the value of what you’re offering them differently. I thought I would do something different by telling you a story to get the point across. Here goes.

A lesson in understanding perceived value.

Once upon a time (I know, it’s a cliché way to start a story, but I’m going with it.) Once upon a time, there was a young graphic designer by the name of Tom.

Several months ago, the large corporation Tom worked at was acquired. As part of the merger process, the new company dissolved the design department where Tom worked, and he lost his job.

Tom was upset, of course, but he decided to see this as an opportunity. With the help of his severance money, he decided to do something he had been dreaming of doing for quite a while, open his own home-based design business.

One day, on his way back from a client meeting, Tom decided to stop in and see his father.

Tom made his way up to the attic, a place he seldom saw, even when he lived in this house with his parents.

“What are you doing up here?” he asked.

His father was sitting amid several open boxes, “I was taking out the holiday decorations when nostalgia got the best of me, and I decided to go through some of these old storage bins. Some of these haven’t been opened in decades. What are you doing here?”

“I had a meeting this morning with a new client not far from here, and I thought I’d drop by before heading home.”

“You don’t sound that happy about it,” replied the older man.

“Dad, sometimes I think I made a mistake starting my own design business. It’s not as easy as I thought it would be. Take this new client, for example. He’s a handyman who does odd jobs for people. He’s looking for a logo he can put on the side of his truck and business cards.”

“What’s wrong with that?” Asked his father.

“You know,” continued Tom, “I read articles, I watch videos, I listen to podcasts, and they all say how graphic and web designers should be charging more money for their services. But I don’t see how. I mean, I’m lucky this guy is willing to pay me $150. Do you know there are services online where you can get a logo designed for under $10? How are designers these days supposed to compete with that?”

The father looked at his son, thoughtfully. Then he nodded inwardly to himself and said, “Thomas, that’s a tough situation you’re in, but I’m sure you’ll work it out.”

Changing the subject, the father asked, “Hey, look in that bin over there. Do you see that wooden box? Take it out.”

Tom looked in the bin and pulled out a small ornately carved wooden box. With a nod from his father, he opened it. The box was lined with old black felt. Resting on the felt was a very old watch. The gold on it was tarnished. The glass was cracked and fogged a bit, and the well-worn leather band looked dry and cracked.

“That my son is a family heirloom. Your, let’s see now, a family gave your great-great-grandfather that watch when he helped them during the Civil War. He called it his good luck charm. He passed it on to his son when he enlisted in World War I. Who then passed it on to your grandfather, who wore it during World War II.

When grandpa passed away, the watch was passed to me. And one day, it will be yours. It doesn’t work anymore, but it’s part of our history.”

“That’s pretty cool,” replied Tom. “Why have I never seen this before?”

“To be honest,” said the father, “I had all but forgotten it until today when I found the box. Hey, do me a favour, on your way home, can you stop by the pawnshop downtown? I don’t want to sell it. But I’d be curious to know what they’d pay for it.”

A little while later, Tom called his father. “Dad, I just came out of the pawnshop. They offered $20 for the watch. They said it looked old so that somebody may be interested in it, but since it’s not functioning, that’s the best they could do.”

“That’s disappointing,” replied the father. “Humm. There’s an antique store two blocks from where you are. Do you have time to ask them what they think?”

Later, Tom called his father again. “Guess what? The lady at the shop was intrigued by the watch. She said a watch that old is a rare find and offered $300 for it.”

“That’s a lot better.” Said the father. “Do you have time for one more stop? Take it down to the museum on the edge of town and show it to the curator.”

Tom hesitated a bit but then agreed.

Later that afternoon, Tom burst into his father’s home. “Dad, Dad, you won’t believe it,” he said excitedly, “The museum curator was so impressed when I showed him the watch. He said a piece like that would be a wonderful addition to their collection. He offered to buy it for $50,000.”

Tom’s father looked at his son for a moment, then asked, “So what does that tell you about the watch?”

“It tells me that the guy at the pawnshop and the lady at the antique store had no idea of the true value of the watch.”

“That’s where you’re wrong, my son.” replied the father. “All three places you visited were correct in their valuing of the watch.

For the guy at the pawnshop, it’s just another watch. Sure it may be old, but that doesn’t matter to him. He sees watches come and go all the time. If you had accepted his $20 offer, he’d add it to the other watches for sale without a second thought and forget about it until someone showed interest in it. And since you didn’t accept his offer, it’s not a big deal to him. There will always be someone else with another old watch to sell him. So there was no real value in it for him.

The woman at the antique store saw a bit more value in the watch because she’s used to dealing with old things. She could appreciate it as rare antiquity and valued it as such. But to her, it’s still just an old watch to display amongst all the other old things in her shop. So even though she valued it more than the pawnshop owner did, it was still only worth $300 to her”

“Now, the museum curator, on the other hand, that guy saw more than just a watch. Sure, it would be just another museum piece for people to admire as part of their collection. But it goes beyond that. What he saw was not the value of the watch itself, but the value the watch could bring by improving the museum’s display.

All three people you showed it to saw the exact same watch. But each one had a different perceived value based on their circumstances. And none of them were wrong.

Tom, son, the same principle applies to your design business. That handyman you told me about this morning, he doesn’t really care what his logo looks like. He knows he needs one. As long as people can read it and recognize it, he’ll be happy. That’s why he only wanted to spend what he did. He has a low perceived value of what you can do for him.

Let me ask you, does your knowledge as a graphic designer or are the skills you use to design logos any different weather a client pays you $150 or $1500?”

“Do you think that the designers who charge thousands of dollars for logos are that much better at what they do than you?” asked his father.

“No,” Agreed his father. “The difference between you and designers charging a lot more is they’re positioning themselves to go after clients who see the value in what they do. Clients that understand a logo as more than just a pretty graphic picture. They understand the value a well-designed logo can bring to their company.

Just like with the watch. There are clients out there who want the cheapest design option available to them. Some clients understand that good design matters and therefore costs money. However, to them, it’s still an expense they can afford only to a certain extent.

And then some clients know that design goes beyond the designed piece itself. When implemented right, good design can drastically affect their bottom line positively. To them, the design is an investment with a projected ROI. And that’s why they assign so much more value to it.

So, Tom, you’ve told me that what you do is no different than what those other high-end designers do. Is that correct?

“Then, son, be confident in what you do because you are an amazing designer. You need to decide what type of clients you want to spend your time working with—the ones who don’t appreciate your value or the ones who do.

His father smiled at him. “Don’t get any fancy ideas about that watch. I’m holding on to it. You can do with it what you will once I’m gone.”

So there you have it—understanding perceived value. I know telling a story like this was a very different approach. Still, I hope it showed you how different people could assign a different value to the same thing.

Just like the watch in my story, what you offer as a designer will be perceived by different people as worth different amounts. It’s up to you to figure out who the right people are and find a way to offer your services to them.

I read a quote recently that is the perfect way to end this post.

There are people out there who are less qualified than you doing EXACTLY what you have always wished to do. The only difference is that they chose to believe in themselves.

Words every graphic and web designer should live by.

What do you think of my story?

Tip of the week Google Alerts

If you are running a design business, you should set up Google Alerts to notify you any time your business name is found by Google.

Google Alerts is a great way to be alerted whenever someone online mentions your business. It allows you to thank them for their positive comments or get on top of things should their comments be less positive.

To set up your own Google Alerts visit https://google.com/alerts 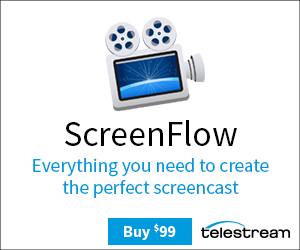